During the Yuan dynasty (A.D.1280-1368) China was ruled by the Mongolian people. Leaders from the preceding Sung dynasty (A.D.960-1280) were unhappy to live under foreign rule.  They decided to coordinate a rebellion without it being discovered. The leaders of the rebellion, knowing that the Moon Festival was drawing near, ordered the making of special cakes. Inside each mooncake was a message with the outline of the attack. Because it’s a Han (the main clan before the Mongolian took over) cake, the Mongolian people are not interested.  On the night of the Moon Festival, the rebels successfully attacked and overthrew the government. What followed was the establishment of the Ming dynasty (A.D. 1368-1644). Today, mooncakes are eaten to commemorate this legend.

Traditional mooncakes are round pastries filled with lotus seed paste with one to four egg yolks, weight about 180 grams each.  The more egg yolks in the moon cake, the more expensive it is and more prestigious when present them as presents to relatives.  You can buy mooncake one by one though shops always sell their mooncakes in a tin box of 4.

Modern moon cakes – modern bakers are trying to be different.  In Hong Kong, you can find dozens of varieties of mooncake with nuts or ham, with white lotus seed paste, red bean paste, green bean paste, fruit or coffee flavor.  About 20 years ago, a baker called Tai Pan introduced a new white stretchy pastry for their moon cake.  They called it “Snowy moon cake” which is very different from the traditional baked, slightly crumbly pastry.  It’s certainly more popular with the younger generation, though the older generation will look at it and say, “Not traditional!”.  Then we have chocolate mooncakes, ice cream mooncakes from Haagen Dazs.

Packaging – Besides new ingredients in the mooncakes, you have more choices of sizes and packaging these days.  There are mini-mooncakes for those who would like to watch their weight but still want to be traditional and have a moon cake on the Mid-Autumn Festival day.  Mini-moon-cake often comes in a tin box or cardboard box of 6 or 8.  Other layout like “7-star around the moon” which means 7 mini or full size moon cakes surrounding a standard full size moon cake in the middle in a round tin.  It’s ideal as a gift for your mother-in-law but it costs a lot more (8 mooncakes!)

In 2008, the traditional moon-cake-bakers challenge the modern bakers with new packagings.  Nice heavy wooden box with fancy carving decoration or various cartoon characters like Thomas the Tank Engine or Doraemon theme boxes with games/toys are available.

When do we eat mooncakes?

The answer is: any time you like.  Typically when Dragon Boat Festival is over, you will start to see advertisement everywhere about mooncakes, which means you can start to buy mooncakes!

Eat it any time you like.  You don’t have to save it till festival night.  But after the festival, everybody is tired of it and no one would want to eat it.

How much are the moon cakes?

I must say moon cakes are expensive because:

Q: ok.. so how much is it?
A: it’s almost HK$50 each, that is about US$6 each.  If you buy a tin of 4, it’s about $180 for a box.  You may get it cheaper if you buy early.  The bakers may offer discounted moon cake coupons so that you can redeem when it’s closer to the festival and they get the money earlier.  Alternatively, you may buy them after the festival, it’s a lot cheaper because no one wants it any more.  It’s suitable for moon cake fans who still want to enjoy more and pay less.  If you really really think the price is not reasonable, you can have lotus seed paste steam bun in a Chinese dim-sum restaurant for something like HK$18 (US$2.3) for 3!  ok.. they are not exactly the same but it has lotus seed paste and a bit of egg yolk.

I’ve read an interesting article recently about making lotus seed paste.  Lotus seeds come from the lotus flowers in the pond.  Each seed pod carries about 20 lotus seeds. 100 grams lotus seed paste takes about 60 whole lotus seeds which may take 1 person 1 hour to peel off the thick skin of the seeds.

As I said, if you love to eat mooncakes or you have lots and lots of relatives, you will need a lot of moon cakes.  I remember when I was a kid, some major moon cake bakers have already launched the moon-cake instalment plan.  Basically, you choose how many boxes you want and you start to pay the baker one year in advance month-by-month.  The baker will also throw in goodies like Chinese preserved meat sausages. 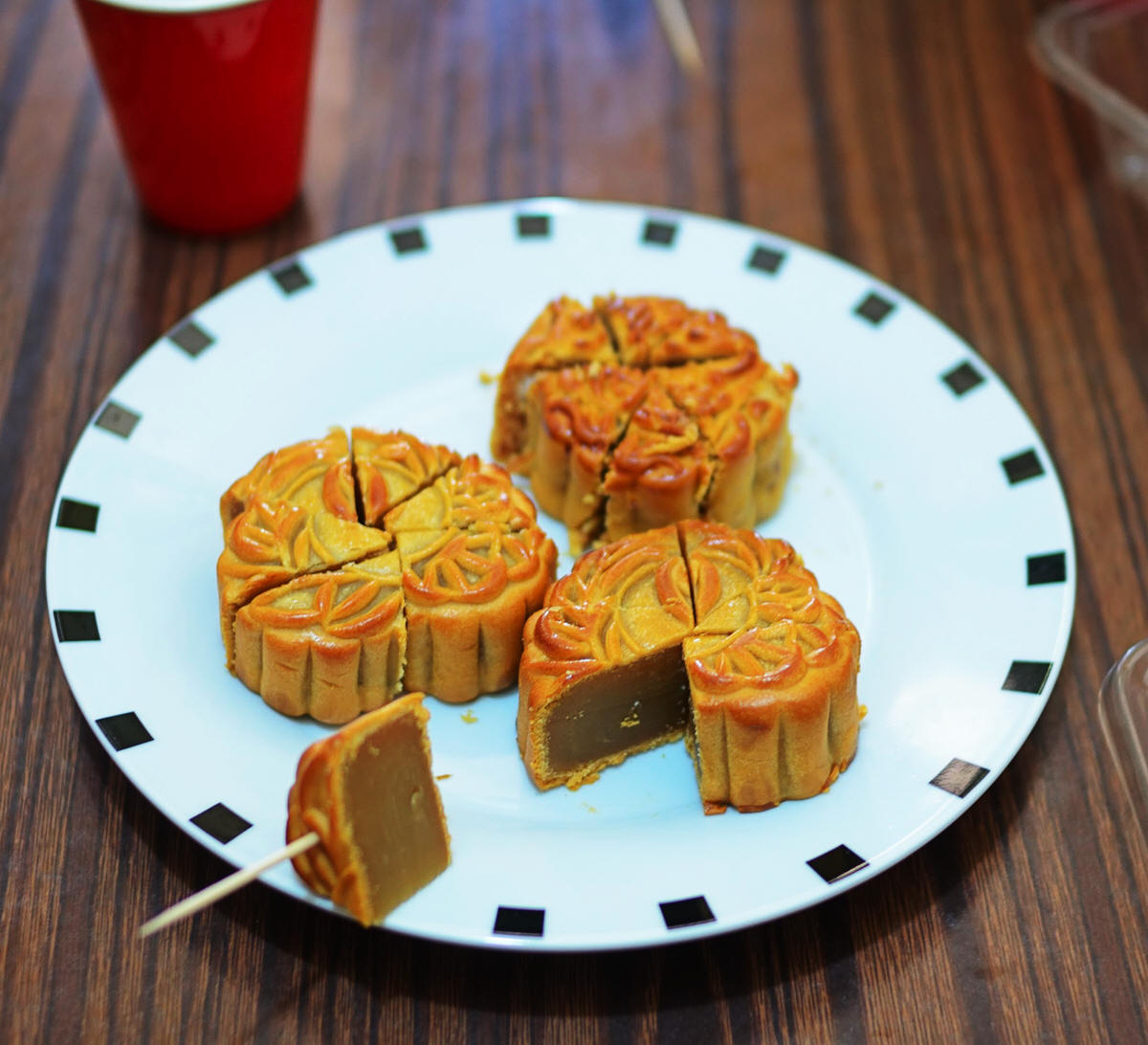