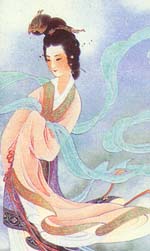 It’s said that in the old old days, the earth once had ten suns circling over it.  Each day the suns’ mother took one sun to illuminate the earth. But one day all ten suns appeared together, scorching the earth with their heat. The Emperor of Heaven ordered a strong archer Hou Yi to save the earth. He succeeded in shooting down nine of the suns. One day, Hou Yi stole the elixir of life from a goddess. However his beautiful wife Chang Er drank the elixir of life in order to save the people from her husband’s tyrannical rule. After drinking it, she found herself floating and flew to the moon. Hou Yi loved his divinely beautiful wife so much, he didn’t shoot down the moon.

7 Things you Need for Mid-Autumn Festival in Hong Kong

Another version of the story is that Hou Yi built a beautiful jade palace for the Goddess of the Western Heaven. The Goddess was very happy and she gave Hou Yi a special pill that contained elixir of life and he could use it after he had accomplished certain things.  However, Chang Er took it without telling her husband.  The Goddess of the Western Heaven was very angry and Chang Er was sent to the moon forever.

Wu Kang was a shiftless fellow who changed apprenticeships all the time. One day he decided that he wanted to be an immortal. Wu Kang then went to live in the mountains where he importuned an immortal to teach him. First the immortal taught him about the herbs used to cure sickness, but after three days his characteristic restlessness returned and he asked the immortal to teach him something else. So the immortal decided to teach him chess. But after a short while Wu Kang was not interested any more. Then Wu Kang was given the books of immortality to study. Of course, Wu Kang became bored within a few days, and asked if they could travel to some new and exciting place. Angered with Wu Kang’s impatience, the master banished Wu Kang to the Moon Palace telling him that he must cut down a huge cassia tree before he could return to earth. Though Wu Kang chopped day and night, the magical tree restored itself with each blow, and thus he is up there chopping still.

In this legend, three fairy sages transformed themselves into pitiful old men and begged for something to eat from a fox, a monkey and a rabbit. The fox and the monkey both had food to give to the old men, but the rabbit, empty-handed, offered his own flesh instead, jumping into a blazing fire to cook himself. The sages were so touched by the rabbit’s sacrifice that they let him live in the Moon Palace where he became the “Jade Rabbit.”

Other facts about Mid-Autumn Festival

What is Moon Festival lanterns