The Festival of the Hungry ghosts is on the seventh moon in the Chinese lunar calendar, on the 14th day.  It typically falls around mid to late August each year.  But some years it is in Sept.

For one long lunar month during the Hungry Ghost Festival, ghosts are said to roam the earth.  The gate of Hell is said to be opened during this month so even now that I have grown up, I still feel uncomfortable to go out at night around the Ghost Festival days!

In the more rural areas like the outlying islands and the New Territories you will see people lighting small fires by the road to burn offerings like paper money to make the ghosts more comfortable.  Proper offerings also include food items like steamed chicken or roasted pork, though the family will eat the meat after the offerings.  Other food items like rice, peanuts, orange or apple will be left on the street as offerings.

There will be Chinese operas in some places. Popular venues are King George V Memorial Park in Kowloon, you may also find them in  Morton Terrace Playground in Causeway Bay. 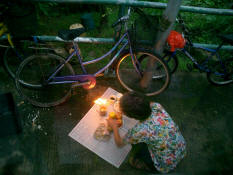 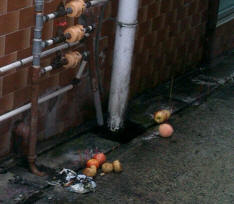 Food left on the street as offerings 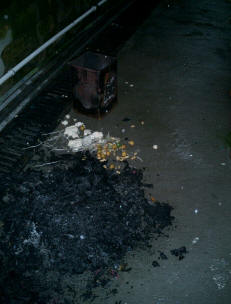 Huge mess on the ground and most people won’t clean it up.  Poor cleaners!