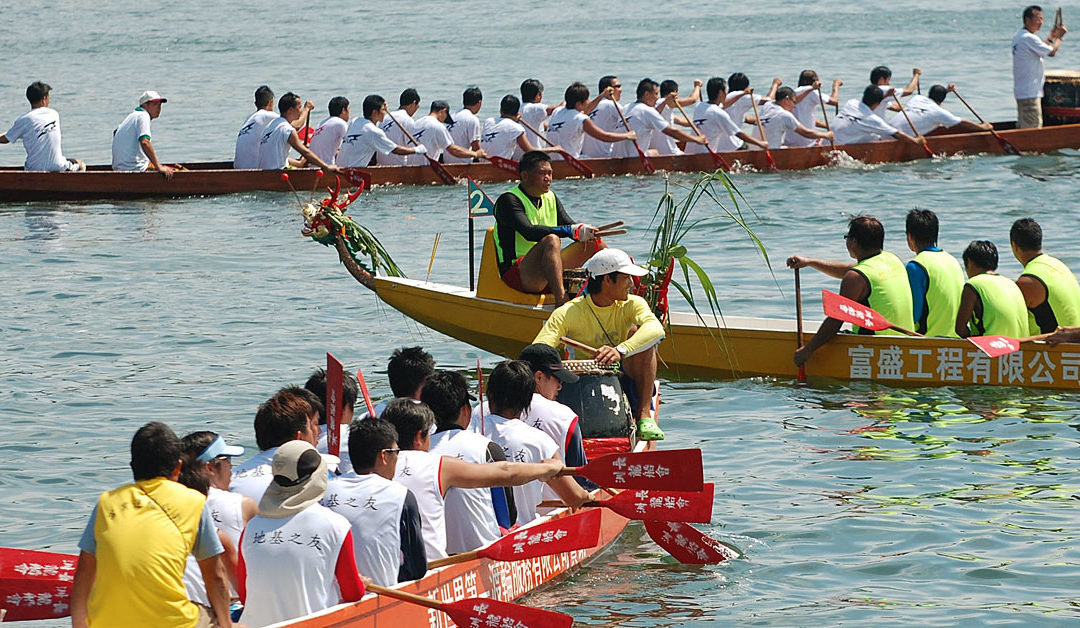 The Hong Kong Dragon Boat Festival is one of the most significant Chinese Festivals on the lunar calendar. Every year it is celebrated with the eating of Rice Dumplings and, most famously, the Dragon Boat Races after which the celebration is named.

Learn the tragic story behind the origin of the festival, the traditional practices and foods associated with it, and how to either watch or participate in the sport of paddling the iconic dragon-headed long boats themselves.

What is in this article

In this article, you will find the answers to your question including:

What Is The Dragon Boat Festival

One of the traditional Chinese festivals of the Lunar Calendar it is celebrated every year with the racing of dragon boats and the eating of rice dumplings.

People respected Chu Yuan for his integrity and honourable intentions. When they heard that he was drowned, they jumped on boats to search for him.  This is a part of what the Dragon Boat Festival commemorates every year.  Failing to find Chu Yuan, people hit drums and making loud noises hoping to scare the fish so that they won’t touch Chu Yuan’s body.  People lived along the river also put cooked rice in the river as a sacrifice.  But then they found that the fish got the rice, so people wrapped the rice in bamboo leaves.  This bundling evolved to the present day’s rice dumplings.

What Is Dragon Boat Racing

Dragon Boat Racing is a sport, based on the traditions of the festival, that involve teams of paddlers racing long wooden boats in the sea or river.

The boats are decorated with elaborately carved dragon heads and tails, and feature prominently a big traditional Chinese drum at the rear of the boat. The drummer on the boat beats loudly on the drum to keep the paddlers in time and to control their speed.

Read our guide to the dragon boat races for more information about the race as distinct from the other festival traditions.

What Do People Do During The Dragon Boat Festival

Watching the races, or indeed participating in them, as well as eating rice dumplings are the main things that people do during the Dragon Boat Festival. Although it is one of the three main family festivals in the lunar calendar, it is the least popularly celebrated.

As it is a public holiday in Hong Kong, this festival is a day of rest for people who don’t want to attend one of the many races. Family gatherings are now not common on the day, but most people will at least buy rice dumplings and eat them on that day.

People buy dumplings not only for their own consumption but also as gifts to family, friends and business partners.

On the morning of the festival itself it is common to eat the dumplings for a late breakfast, then attend one of the many dragon boat races held throughout Hong Kong in the afternoon.  After the races, it is considered good luck to “swim in the dragon boat water”, though generally this can be taken to mean any swimming in the sea.  As some of the races are held near beaches, notably the race at Stanley Beach and the races on Lamma and Cheung Chau which are adjacent to public beaches, this is a fun activity on what is often a sweltering hot day.

Tuen Ng festival foods consist of a wide variety of glutinous rice dumplings (“Jung”, 五月粽 or Zong Zi).  These are often eaten at breakfast on the festival day which, as a day of rest, tends to start late so rice dumplings for brunch are quite common.

The Lunar calendar starts every year with the Chinese New Year festivals.  The exact rules are involved, but generally day one of the new year is the first day the first month.  Each lunar month is one circle of the moon with a new month on each full moon, which is every 29 and a half days.

Therefore the 5th month starts with the 5th full moon starting with the Chinese new year.  On the 5th day of that month the festival is held.

Dragon boat race and other findings – However, some people found that Tuen Ng actually started before the death of Chu Yuan.  It was a dragon-related festival to start with, and the dragon boat race did not take place on Tuen Ng day until Ming dynasty.  Dragon is the god that rules the water world.

Dragon Boats feature the head and tail of a dragon.  After the dragon boats sailed in the water, the water is blessed and people nowadays still swim in this ‘dragon boat water’ hoping to stay healthy for the rest of the year.  Dragon boat races are so widely accepted that it became an international competition.

The traditional food for the dragon boat festival is rice dumplings. These dumplings have been around for such a long time it is impossible to tell when then originated, but they were undoubtedly already famous as a summer food in Eastern Han dynasty (206 BC–220 AD).  It was not until the Western Tsin or Jin dynasty (265–316) that they became associated with the Dragon Boat Festival.

The dumplings are all made out of the same type of rice, a variety that has a high gluten content and is called either glutinous or “sticky rice” because of the different texture.  Also popular in Thai cuisine this type of rice is quite different from the “Jasmin” rice generally eaten as plain steamed rice or fried rice.  Because it is stickier, it can be formed into dumplings which hold their shape when cooked and can be filled with a variety of ingredients.

Traditionally a home cooked dish they would be made by hand for family and friends. As it is quite labour intensive to make a large number of them, this would involve family members coming together on the day before the festival to prepare them as something of a family event in itself.  Today only a few of the more traditional older family members will bother to cook their own, while the majority are purchased from restaurants and bakers.

The idea of having plenty of dumplings, enough to give to other people as gifts, has remained and so there is are often queues of people waiting outside shops which have a good reputation for dumplings in the days before the festival.

There are two basic types of dumpling, savoury and sweet.

As with other traditional foods such as moon cakes, the bakers in Hong Kong have developed a wide range of modern flavours and enhancements to add to these basics.

Today you can find dumplings with XO Sauce, dried scallops, preserved eggs or other beans on sale.  The Taiwanese variety of dumplings have also become more popular in Hong Kong.  In these dumplings, the rice is mixed with soy sauce and hence is brown instead of the more traditional white appearance.

All rice dumplings are wrapped in bamboo leaves. These large long leaves are harvested especially for the dumplings and can be seen in markets and dried provisions shops in the days leading up to the festival.  While large as leaves go they are still small enough that wrapping a dumpling in one or two leaves is a tricky process that requires much practice to avoid a leaking dumpling.  Unlike some other foods traditionally wrapped in leaves, the bamboo leaves do not add any particular flavour to these dumplings and are merely a traditional presentation.

After wrapping in leaves the dumplings are tied up with reeds, also sold in the same shops, and then immersed in boiling water until cooked through.  Once cooked and chilled the dumplings last for several days in the refrigerator, longer for the ones made in the food factories of big bakers where extra sterilisation is done.

Before serving the dumplings need to be reboiled until piping hot throughout.  Not only is this necessary for food safety reasons but the texture of the rice is hard and unattractive if the dumpling is not properly heated.

There are as many recipes for Dragon Boat Dumplings as there are families in China!  Here are some English language ones from respected cooks:

Superstition – Besides the death of Chu Yuan, the fifth lunar month is considered an unlucky month.  People believed that natural disasters and illness are common in the fifth month.  Superstition is unavoidable.  Most families hang calamus and Artemisia above their doors, kitchen and bed to help to get rid of the misfortune.  These are the leaves different gods and legendary heroes used to get rid of evil spirits.  Portraits of gods could be purchased to put on the front door to protect the whole family too.

It is believed that Dragon Boat Festival Day is a great day for collecting herbs as medicine.  They think the herbs work better if you pick them and prepare it on this day.  Various kinds of herbs are also boiled in the water, and people bathe in it to help to stay healthy.

Weather sayings – The festival is used as an indicator of the coming and passing of summer through two sayings which connect the festival with the arrival of dependable good weather, and it’s departure later in the year.

Although the legend regarding Chu Yuan is widely accepted there is some evidence that many of the traditions associated with it have older roots.

Two possible alternative stories are based on the drowning deaths of Wu Zixu who died in 484 BC or Cao E who drowned in 143.

It is also entirely possible that the festival assumed pre-existing traditions of boat races and dumpling eating. Worship of a “dragon king” existed before the festival and racing dragon-headed boats and offering dumplings were practices associated with this worship.

Well here in Hong Kong we don’t send greeting cards for festivals like this, but if you do want to send a themed note to a Chinese friend in another country then you can get Dragon Boat Festival E-Cards now!  That’s amazing I think.

As a festival celebrated all over the Chinese global community, it is not surprising that it has a lot of different names. Only some of those terms are commonly used in Hong Kong.

In other parts of the Chinese community in China and around the world other names are also used, you will also see these mention in a variety of documents about the festival. However, they are not commonly used in Hong Kong.

Dragon boats come in a variety of sizes and types.  While all basically the same long-thin shape they may be made either of wood or fibreglass.

Shorter ones are often made of fibreglass and are very fast and light.  While wooden ones are of course more traditional and generally have larger crews.  They can also be very fast but being so heavy are used for longer races and take more time to get up to speed, and to slow down.

Want to consider getting your own dragon boat? Try checking with LuckyDay, a fibreglass boat builder who can provide you with a range of choices.  Here is the label on one of their boats.